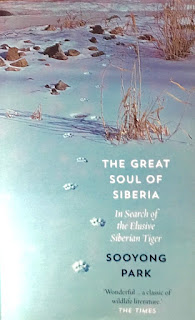 It's been a bit 'Animal Farm' in the Belgo Geordie household as of late! I'm talking' about reading and thinking, rather than we've taken up farming' or owt. Although, it's been a lot more blurry quiet since the Belgo Geordie cat went and turned oop his claws an' whistled last post on us. But no, I have hit a rich vein of books lately about animals and mostly top of the chain predators at that. There was the deeply satisfying novel "Wolf Border" by Cumbrian lass, Sarah Hall. A story around the re-release of wolves into northern England or the Borders-not that I think of that wild area as being England or Scotland. Its Border Lands. Beautiful, remote and with its own history and code of justice. A place where yon wolves would fit right in. The main protagonist in the novel, a wolf expert, is as single minded as the animals she champions. A rare read! Then there was a sheeps book also from Cumbria "The Shepherd's Life" by James Rebanks-Sort of fitted well alongside a CD by Kathryn Tickle "Northumberland Voices". Especially the title track which is about the borders sheep farming community. (Yes, I know sheeps are not top of the food chain, despite 'Silence of the Lambs'. The ones in this book are only grass killers) - but Mr Rebanks book is the stuff about nature head up against modernisation and a reminder of why working with nature remains essential to our world. Lastly, I'm immersed in "H is for Hawk' by Helen McDonald and her managing grief while training a goshawk in Cambridge, England. It is an emotional belly ripper and deeply engaging in thought and substance.

Now as a nipper, I wanted to be Gerry Durrell but without the belly. I liked Kes the book and film. I spent a lot of time in the company of birds and animals-even working a short stint at London Zoo. Boot as a teen wurkin on me scowl, it fell away about the time I hit a brick wall at school and a subject called physics (not ta mention new math, what were wrong with the old one like? It worked if you had enough fingers and were canny at counting). Belgo Geordie were a bit of a dunce in understanding matter that didn't seem to make sense when standing still, I was always left feelin' I'd bin left a bit short changed an' its taken me fifty odd years to catch oop. I can read book on physics an' oonderstand a page or two. Time moost be relative!

Anyhow, it were this book "The Great Soul of Siberia" that provided unexpected readin' pleasure and hours of head scratching and the use of the word bugger to express deep and thoughtful emotions. "Coop a' tea our Geordie?" "No Mrs Belgo, not at moment! I'm just contemplatin' what it would be like being eaten by three fully grown Siberian Tigers when all I've lived on in a hole in the ground over a Siberian winter is a couple of balls of rice a day and a few nuts." "Alreet then pet, sing out when you want a brew then!".
If there is ever a man to admire then it would be after reading this book, Sooyong Park. In the days of 'instant I want it now' footage, this is a man who approached Tiger spotting with the guile of a buddhist monk crossed with a tax accountant. He gave his life to spending months at a time buried underground or on a cold platform above the tree line (and above tiger reach). In a hide on animal trails that the tiger hunted. Logic being they would come that way searching dinner. He studied every paw print, left over kill (how they eat a kill is deft-like a gourmet), pissed on branch, bit of hair on a favoured rubbing tree and the scratch marks reaching high up into the canopy. But mainly he sat still underground in the cold for months on end in the hope that he might see and film a bit of Siberian Tiger in its natural environment. Behaving as it would when it knows its not being filmed by David Attenborough (you know farting, picking its nose, scratching its balls or when pissing up against a tree, considerin' yon French philosophers) - Mr Park wanted his presence to be as invisible as it could be. This included having minimal scent and mostly (except where he was grassed up by a rowdy bunch of field mice in his hide) he succeeded. And succeeded in getting to know so much about this impressive animal that if it were ever to become extinct from its habitat then this is a fair record of how much a loss it would be on the Siberian eco system and landscape.
The book is part philosophy, spirituality and a love fest for the tiger, an' this is an impressive book. So much so, that when I heard there were a filum about it I looked up the documentary "Siberian Tiger Quest" by Wigan born black bear expert Chris Morgan. This covered Mr Park's work and he features in it as mentor to the media savvy but for me, annoyingly reality type TV presenter Mr Morgan. "In two weeks I will learn all it has taken Mr Parks years to learn and without being buried under Siberian dirt, snow and tiger droppings or using cameras made from old coke bottles tied up with rubber bands and made to look like part of the Siberian landscape." Boot, The bits with Mr Park showing some of his skills to yon lad green behind ears is worth the watch. And it has good footage from Mr Park's years of patient study and jammy Wigan lad even got some film of a tiger on one of his hidden cameras.

These tigers have survived in this habitat by being suspicious (rightly) of folk. To the point they find cameras and destroy them. And niver, niver forget time nor place! Mr Park had to work hard to make them ignore him and his cannily constructed tracking and filming equipment. One of the best pieces in the book is where courtesy of those pesky field mice, a family of three tigers including the beautifully named mama tiger 'Bloody Mary'  curiosity, turns to suspicion, to full blooded search and kill anger against a perceived threat. They nearly dig Mr Park out of his hide. Three large, angry cats jumping' up and down on a thin piece of ply covered in dirt, blankets and leaves. Inevitably it shatters with one large paw belonging to an astonished tiger poking into the nothingness of the hide's interior. It produces what must be a massive understatement in "You haven't lived unless you feel a fully grown Siberian Tigers breath against your frozen cheek"-while you lie still with a scrabbling, well armed claw just above your head looking to scoop you out like a whelk. All the time pretending you are just a harmless middle aged Korean man who probably should have stuck to studying literature all those years ago. Mr Park still does not have a coherent explanation why he wasn't dug out, gutted, filleted into human jerky and bone polished other than at some stage Bloody Mary decided to call off the attack. Rice ball farts, three months of unwashed underwear mabe? I can imagine Blood Mary sayin' in Tiger like "Cum on bairns, it smells a bit Roker Park down there. Lets go find some fresh racoon dog to snack on before big match."

The documentary is also worth seeing in that it confirms what comes across in his book. Mr Park is a very humble man with a deep love for the tigers he encountered and the country they live in. His description of the Siberian landscape in all its seasonal changes, its flora and fauna, its indigenous peoples, is poetic, inspiring and in the vein of Dersu Uzala*. But more importantly it is his homage to the special place tigers hold in this region and like Sarah Hall's book on wolves, he is of the view if you take away the top of the chain predators and the eco system distorts and loses direction. Sadly the poaching accounts for some of the tigers he studied. But at the heart this book is a remarkable family of intelligent cats. With complex and affectionate family relationships. The king tiger, solitary - roaming large areas of territory, playful when encountering his mates or cubs that are his but if not from his brood or a rival male - then deadly. For those who believe people are smarter, better than other life forms. This story shows how little merit this viewpoint holds. Imagine surviving in Siberia on your human wits alone. How much we would lose should theses impressive animals become extinct. I wonder what Mrs Belgo would say to a small orange and black fluff ball called Sib to replace the departed mog? Better go and sheer a few sheep, an' feed the raptor some noisey field mice. Bloody wolf - on roof howling' at moon again!

All pics except last from Mr Park's book.
* Dersu Uzala: see magnificent film by Akira Kurosawa based on the novel by Vladimir Arsenyev set in Siberia in the early 20th century.
Posted by Belgo Geordie at 23:44